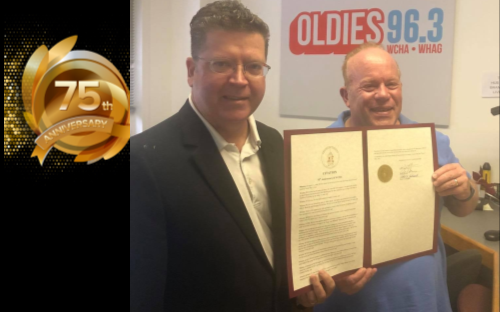 On August 11, 1946, WCHA signed on the air for the first time. It had been delayed several years by World War II

WCHA has had the same call letters, the same frequency, 800 AM, the same studio location, the 4th floor of the Professional Arts Building in Chambersburg and the same transmitter site, Paper Mill Road in Hamilton Township, for 75 years. That is unheard of in radio!

WCHA was the first radio station in Franklin  County.

WCHA was founded by John S. “Sam” Booth. His legacy was carried on by his Children, John S. Booth III and Margaret Booth-Ehle. WCHA was in the Booth Family for nearly 54 years.

WCHA-FM signed on in 1948 as Franklin County’s first FM station. It signed on at 95.9, later moved to 95.1 and eventually became WIKZ.

WCHA-TV, Channel 46, was Franklin County’s and the Cumberland Valley’s first TV station from 1953-54.

In 1966, WCHA was granted temporary authority to remain on the air after local sundown in order to provide local news coverage in the Peggy Ann Bradnick “mountain man” kidnapping.

WCHA has been the home over the years to long-time, local personalities who have entertained and informed listeners, both in-studio and on-site, and who have been a big part of the community in Franklin County. These would include Earl Strine,whose Franklin County Fair broadcasts are legendary as well as Scott Douglas and Lisa Kline, among many others. WCHA provided weather forecasts from local meteorologist Bob Sellers for many years.

WCHA has been the home over the years to much sports coverage, including at one time or another, play by play for the Phillies, Orioles, Pirates and Penn State Football. WCHA also provided play by play of local high school football. WCHA’s full season coverage of the Pittsburgh Steelers continues to this day.

WCHA has supported the faith-based community of Chambersburg and Franklin County, over the years,providing broadcasts of local church services.

In 2010, WCHA became an affiliate of Scott Shannon’s True Oldies Channel, a format that plays many of the songs WCHA played as current hits back in the day.

A simulcast of WCHA began on 1410, WHAG in Hagerstown in 2010 as well. In 2011, WCHA signed on a translator at 96.3, providing FM coverage of WCHA for Chambersburg and northern Franklin County.

At nearly 75 years on the air, WCHA remains a very popular listening choice for those aged 55 and older.WCHA has been owned by Alpha Media since 2014.